Life can change in an instant. One day, I’m married to a beautiful, healthy man named James “Awesome” Williford, and the next minute, he’s gone, killed instantly by a police chase. What? How does this happen? What exactly happened? Chaos ensues, and I am catapulted into a world of darkness and despair. James is gone forever, and life has changed. Prior to his death, we had been working on starting a family. Now, instead, I find myself at a funeral home, buying my husband a beautiful, silver casket. My sweet James was a musician; he played the bass guitar in a band. He was super-talented and hilariously funny, with the ability to brighten anyone’s day. It wasn’t until the shock of his death became my reality that I found out how he had been killed. My first thought upon learning of the deadly police pursuit was to change Austin’s pursuit policy—it didn’t seem safe. Why had my husband had to die over a stolen truck? Hadn’t there been a better way to apprehend the suspect? Was property more valuable than life? These questions motivated me to learn more about and promote awareness of this devastatingly common occurrence. Individual police departments across the country adopt their own pursuit policies, although some police departments don’t have a pursuit policy. In some states, like California, officers are not required by state law to follow their pursuit policies and are protected by immunity shields in the event of an injury or fatality. These practices seem erratic and dangerous. According to the United States Department of Justice, pursuit policies are categorized into three types: discretionary, restrictive, and discouraging. Discretionary policies are the least restrictive and allow a police officer to make all decisions, including when to initiate a pursuit and when to stop it. A restrictive policy is defined but also allow officers to seek advice from their commanding officers or supervisors on whether to pursue or not. The third type of police pursuit policy is the discouraging policy, which is extremely cautious of any pursuits and only recommends pursuits when there is no other solution, or the situation is so extreme as to endanger the lives of others. I compared Austin’s policy to Dallas’s and found out that the Dallas policy has more restrictions on pursuits. For instance, in Dallas, law enforcement is not allowed to pursue unless the suspect has committed a violent felony or someone’s life is in danger. In Austin, on the other hand, law enforcement can pursue for nonviolent felonies and misdemeanors; running a red light or stealing a vehicle without an act of violence is sufficient cause to initiate a high-speed police chase. Pursuits are a dangerous business. These chases endanger the lives of the innocent, on average killing three bystanders every week in the United States. And police are not exempt from the danger; a police officer is killed every six to eight weeks in a vehicle pursuit or response call. We need to reduce the number of people killed as a result of pursuit crashes. Many police departments are restricting their pursuits to violent crimes only and when the offender puts the public in imminent danger. When officers follow these policies, they save lives and make our roads safer. I challenge law enforcement officers to think outside the box, to use alternative methods to apprehend offenders and avoid pursuits through high traffic areas where civilians are present. Many times they do arrest the suspect another way; we just don’t hear about it because the officer did not pursue, a crash did not occur, and no one died.
By Officer David Pienta 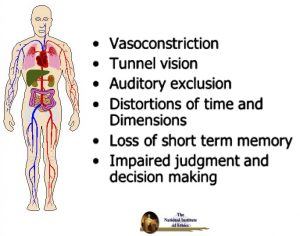 I remember the first time I had someone run from me on a traffic stop. I was still a rookie. I was partnered up with a full-time deputy, waiting for my FTO training to begin formally. It was a clear night. My partner was driving. The department’s chase policy was not to chase unless the driver had or was committing a forcible felony. We did what we would always do, use our overhead lights to indicate a stop. However, this stretch of road was not conducive to traffic stops, as there were limited spots a vehicle could pull over. This time, rather than pull onto a side street, the car driven by the suspect pulled perpendicular across the side road. This blocked the side street and made us stop nearly in the middle of the 2-lane highway. The stop was called out on the radio per protocol. As my partner walked up to the driver side of the car, he informed he was going to ask the driver to reposition his car to get us off the road, and he wanted me to move our squad car behind the suspect’s car. I was making my way behind our car when the suspect took off from the stop. I felt like I was running in slow motion trying to get back to my passenger door and get in the car. I got in, and my partner hit the gas. Before I knew it, we were nearing speeds of 100 MPH trying to catch up to the suspect, lights on. Being a rookie, with my adrenaline not as high as my partner’s, I knew we were not allowed to chase by policy. However, my partner had taken the radio mic from me to prevent me from calling it out. I used my handheld mic and called out the pursuit, the description, direction of travel and speed. The shift supervisor called off the pursuit, much to the displeasure of my partner. He pulled over, beat the steering wheel while cussing up a storm. He stopped the car, kicked the tires a few times. My partner then told me he needed me to drive because he was too upset that the car and driver got away.

We must remember this job is not personal. We must take our emotions out of our job. It was not my partner or me as a person that caused this guy to flee; it was the uniform and the patrol car. It could have been anyone in uniform driving it, and the results would have been the same. We can not let our emotions dictate our response.

We must remain in control to make sound and safe decisions that will result in us going home the same way we came to work. Find ways to take the stress out of your life through hobbies or exercise. We cannot win every incident we face. Just remember, as a wise instructor once taught me, bad money keeps turning back up. I promise you this was not the first time this suspect fled, and it will not be his last. The suspect will eventually get caught. Make sure you stay in both the policy and the law. But also take the time to make sure the risk is worth the reward.
By Officer David Pienta We all want to get the bad guy. We want to make the arrest. We want to be first on the scene. However, in this video of an officer-involved chase/shooting, I see a lot of things done wrong. If the decision is made to continue with the pursuit, we can not afford to make mistakes. Mistakes can end up with injuries, deaths, expenses into the millions of dollars should a lawsuit come out of the situation. The initial call comes out as a man with a gun in a restaurant muttering to himself. For all we know, he is suicidal. They find him in his vehicle where he refuses to talk to officers, and the chase is on. Several things to note from the dash cam… Summary: I know chases get the adrenaline flowing. Do not get tunnel vision. Avoid auditory exclusion. Slow things down. Is there a chopper available? Can we position cars not in the pursuit into the general area without driving fast? Do we have technology that can be used to track the driver while ending the pursuit? Driving 110 MPH not only endangers you, but it also endangers other drivers, pedestrians, the suspect. Pursuits, due to a very high risk to everyone involved, should be a last resort. If we decide to pursue, we must certainly remember to clear intersections before going through them. Just because the suspect goes through the intersection does not mean you can. There are many distractions in cars today. Insulation has also improved. Combine that insulation with the radio and/or phone and civilians will not hear the officers coming. It is up to the officers to make sure that if the choice to pursue is made, it is done as safely as possible. Lights and sirens are not a pass on traffic control devices. Any collision arising out of going through an intersection in which the surrounding traffic has the right-of-way, you are at fault should a crash occur. At the point of this chase, all we know is “a man with a gun.” He has not hurt anyone as of that point. Make sure the risk to the public and officers is worth the actions you are taking.