Law enforcement activity as entertainment started when COPS first aired in the early 1990s.  Now we have Live PD, Police Women of Dallas, PD Cam… Every time there is a law enforcement pursuit it seems if there is a news helicopter in the area, it is not only filming the pursuit for the news, they are doing live broadcasts to TV as well as the web.

The public now sees pursuits as entertainment rather than bringing a suspect to justice.  The public views it as a game of cat and mouse.  All the while, no one watches the pursuit thinking about the danger posed to the public as well as all of those involved.  No one stops to think about why is the suspect being chased in the first place.

As if all of that was not enough, the entertainment of pursuits has come full circle, as a company in Las Vegas is now offering law enforcement pursuits as entertainment, allowing you to take part.  With this company in place, pursuits are now fully glamorized. 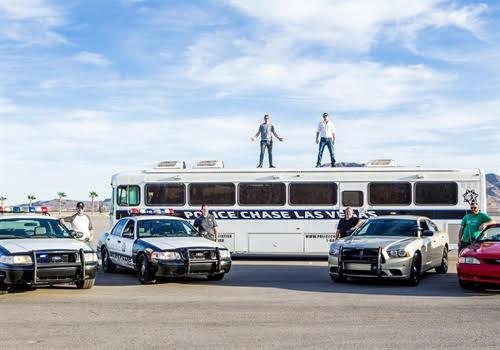 Law enforcement has taken the stance of not using the name of active shooters as much as possible, to not give them the attention they desire.

Why can we not do the same for pursuits?  Why air them?  Why allow people to experience “the thrill” of them?  All we are doing is promoting a deadly activity.

During this “entertainment”, I am willing to bet there is zero talk of the risks to the public or to anyone involved.

According to Las Vegas Now (see image above), the attraction allows people to participate in a simulated vehicle pursuit just a few miles from the Las Vegas Strip. Image courtesy of Police Chase Las Vegas. PursuitSAFETY expresses its condemnation of this type of entertainment that encourages people to commit a crime that kills and injures innocent bystanders and police officers every day.